Arguably Valleyfair’s most famous coaster, this green monster will have you going wild. Wild Thing begins by slithering 207 feet up the first hill, giving you stunning views of the entire park. This colossal hill is followed by a gravity-defying drop where the ride reaches up to 74 miles per hour. This drop then immediately rolls into a second smaller hill which will have you floating in your seat! Next is the figure eight helix which soars under support beams for the ride which seem uncomfortably close, but are in fact out of reach. Views of Route 76 can be seen as you begin to coast and catch your breath, but the funs not over. Wild Thing then concludes with a series of camel back hills running alongside the two initial hills. After you’re greeted by a pitch black tunnel, make sure to smile for the camera! Photos can be viewed after the ride. Wild Thing is located between Funnel Cakes and Prontos. What are you waiting for? Go wild! 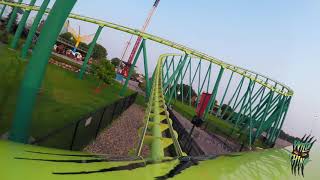